Posted by Ed Keenan on Wednesday, 26 February 2014 in Birding Articles 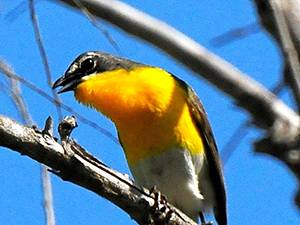 Though uncommon and very localized here in SoCal, I have known over the years that the Yellow-breasted Chat migrates to our area in the spring. But, they are very secretive and skittish, so they are hard find and observe. Over the years, I have known their chatty vocals, so have heard them in the dense willows and thickets, even at our local Guajome Park, here in Vista, CA...

Last spring a pair demanded my attention from deep within the cover, but did not allow me to see them. On my next outing, I heard a male along the San Luis Rey River, near the Pala Indian Reservation. And, finally with my binoculars I was able get a couple of glimpses of him slinking through the willows. But, I got no truly satisfying looks. I guess I was greedy.

Like many other fruit loving birds, they make trips, back and forth from the river bottom to an elderberry tangle when ripe with greenish-yellow fruit. The elderberry is a bird magnet when it is fruiting, so I kept the location in mind. 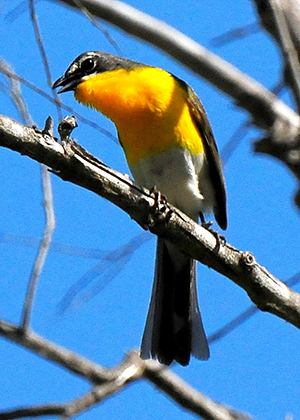 So, determined, the following year, I went back in the spring to the same spot to try and get a satisfying view and possibly a photo. I said to myself, “I’m pulling out all the stops . . .blinds, recordings, etc., whatever it takes.” I got myself situated in the shadows of an opening in the willows and dense cover. I took a position up on a sandy shoal. After letting the ripples of my intrusion settle down, I flipped on my iPod to the Yellow-breasted Chat recording. This is something I normally do not do—but this time I gave it two or three plays and shut it off to see if that was enough to excite a male to respond.

Bingo! I caught sight of a male carrying a large caterpillar that it had beaten the juices out of. So that meant they had a nest close by. It paused in a willow and then chased away a Bewick’s Wren and disappeared down in to the bramble thicket before I could raise my camera. Nevertheless, I got a good view of this brilliant chatty warbler.

How satisfying to finally see a local life-lister. (birders maintain a “life list” of new birds they see and identify) Especially, one that I had been chasing for years, right in my own backyard! I could have been thoroughly happy with just that observation and said to myself: “Mission accomplished!” But, as I said, I was greedy. I made a pishing noise and waited silently. To my surprise he leaped straight out of the tangles and did a butterfly dance in midair, chattering away. He flew up into a dead tree out in the dry riverbed, but he was quite a distance, so I was glad to have my Nikon 200-400 lens, fitted with a tele-converter. Bright morning sunlight was very helpful.

As he moved himself out of the limb shadows, and in to sun, he was chatting and questioning and answering back—sounding like a Mockingbird arguing with a California Thrasher—he hardly changed limbs or positions for a good two minutes.

I was sweating and now realized I was stuck right next to some vicious stinging nettle. Irritated, but undeterred by my excitement, my pain tolerance went up and my awkward position got perfectly comfortable. I did my best to get a few shots without scaring him off. Just as quickly as he appeared he disappeared down in the willows and blackberry thickets. I spent the next two hours birding the area and I only got one other glimpse of him. Later, I heard another male about 100 yards west, but never saw him. 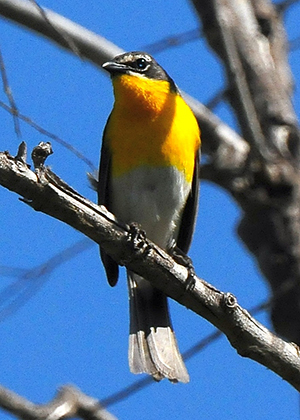 The skin on my hands and left arm still burned and itched from the stinging nettle long after I got home. Not even calamine lotion or bicarbonate of soda did much to eliminate the pain. Ahh. . but, there is nothing like getting a good view of a life bird, instead of just talking about the one that got away. And even better yet, I came home with a life-record of it—to share with you!

This whole experience even inspired another narrative verse. Look for it in my second edition of BardSongs and Seasons. It is entitled: “Chasing a Chat”.