In My Own Backyard

Posted by Ed Keenan on Saturday, 03 August 2013 in Birding Articles 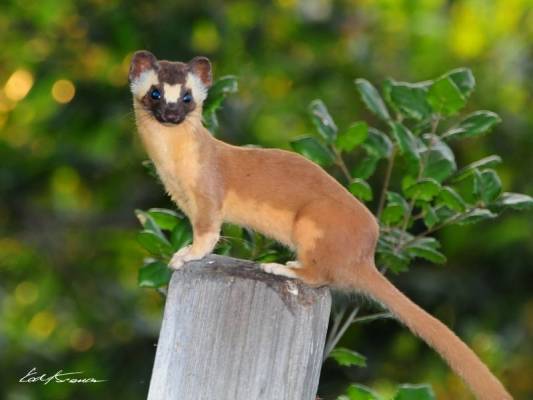 Bonding with nature in my own backyard? —Nah, not possible. To bond with nature, I need to get away and go where nature is, where all the wildlife roam free in the wild. I need to get away from this grimy asphalt and paved-over world, corralling me with chain-link fences! I need to get out where the creeks and rivers and canyons of green are teaming with birds and other interesting creatures.

These kinds of feelings come natural here in suburban southern California. It seems like all the fertile hills and lush valleys are being scraped and covered over with asphalt and houses—expensive ones at that! In this semi-arid country, many of the ancient groves of gorgeous live oaks, planted by the scrub jay hiding acorns, are all but gone now. Except for some scattered creek bottoms here and there that escaped the ravages of progress, many lush riparian habitats no longer exist.

Once alive with avian songs in the early morn and hoots and calls at night, what were lively marshes and babbling creeks are mostly silent now. They have been dug, dredged and drained and replaced with huge concrete culverts—then bulldozed, buried and graded over with asphalt and sidewalks.

An amazing thing happened along the way though. Fortunately, a few tree-huggers screamed loud enough over the years to save the migratory bells vireo. Their loud voices insisted on saving some of the native willow trees and ancient riparian habitat that serve as the vireo's nesting sites and food source. Willows are the host to the larvae-caterpillar of the admiral butterfly. As a result, today some canyons and riparian woods are even being protected and enhanced, even replanted in some areas. These park-like green belts add a ribbon of respite to their respective communities and serve as a natural habitat for indigenous and migratory birds and other wildlife. They also serve as verdant bird walks and cool shady places to escape the grimy summer asphalt; right here in my own backyard.

For instance, this morning the dense oaks and patches of willows along the Vista Creek were filled with repeated calls of su-weet, su-weet. Pacific slope flycatchers were busy feeding their young. They were working the sunny openings in the woods, like bees in a hive they head towards the light. The parents were catching emerging gnats and mayflies for their fledglings. With each dart and dive I could hear a soft, snap, snap, as they captured their prey and returned to the overhanging dead branch. I focused my binoculars on each of them and both the male and female were intensely occupied, attending their fledglings.

Pausing for a moment—a vital necessity to connect, observe and appreciate nature—I stood staring at nimble water skippers (striders) strolling on the surface of the placid creek like Christ walked on water. I also observed the occasional water beetle with a bubble on his rear doing a penguin swim, when, here comes a big red skimmer dragonfly rattling its noisy cellophane wings. It perches glistening in a sunny spot on a fallen log jutting out over the creek.

Under the log a one-armed crawdad slithers sideways across the bottom, following the decaying liquid trail of an unfortunate nestling that had fallen from its nest. Though I was here basically to observe birds; I stood contemplating each fascinating creature fulfilling its unique role in the fragile riparian ecology that I so enjoy. A riparian ecology saved and restored by the efforts of those who worked hard to protect a fragile green ribbon of nature winding through an arid asphalt community.

Suddenly a young red-shouldered hawk swoops in causing the beechy ground squirrels to bark and scurry. From its perch it begins eying me with the typical bob and weave of its head. Focusing intently, it tried to figure me out. Standing very still, I mock it with similar bobs and weaves of my own head—when suddenly it flies directly at me and lands on a branch just above my head, not more than eight feet from my face. For an instant I thought it was going to land directly on me or attack me.

Slowly, I continue the bob and weave, and we both bobbed and weaved together in a bizarre ballet. It seemed very unafraid; for two or three long minutes we interacted. Then, it squatted down and hunched up as if prepared to fly. It almost seemed to want to drop down on me. But it flew up on a branch a little higher where it stayed in my presence for ten or minutes or more. As I slowly moved about observing other birds and wildlife it never left or changed locations.

Finally, in a surprising move, the young hawk lunged down just below me, into the shallow creek, about fifteen feet away. It hit the water with a splash as if it had spotted a prey. Thrashing and splashing around about three or four times, it flew off up the creek under and over the majestic limbs of the sprawling live oaks and disappeared. I was left utterly amazed. What a unique bonding experience that will likely never happen again! Naked and unembarrassed, it apparently took a short bath right in front of me, or was it just putting on some sort of a strange show? I'm not quite sure which one of us was the most curious.

The last time I was here was early last winter. I was sitting on a rock, situated just off the trail above the creek, when a large coyote with a colorful plush coat came along the trail. It was obviously a male. He had an unusual amount of contrasting rufous color across his neck and upper shoulders. He paused as if he had caught my scent and looked around cautiously. Dropping his head down for an instant, he raised it up on full alert and pranced off in a wild coyote gait on up the creek and out of sight. I've seen a lot of coyotes but that was truly one of the most handsome.

On a previous visit, I had come around an embankment and upon a beautiful bobcat lying, straddled, over a big oak limb with all fours hanging down. I paused and it gingerly descended the tree down the slanted trunk, and wandered off twitching its stubby tail in typical cat fashion, that of being annoyed, and from out of nowhere, a white tailed weasel scurried up on to a fence post and posed for just a brief moment before disappearing.

Funny too, how especially here in the arid west, with just a little planning to save and protect our precious riparian habitats, we can all make a big difference right in our own backyards. 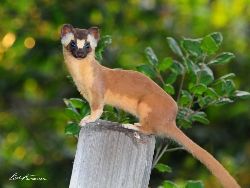