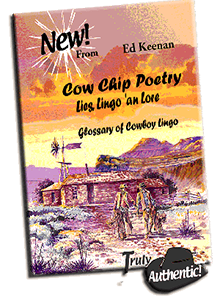 By nature, cowboys are jokesters and pranksters and greenhorns are often their favorite target. I remember this cowboy that had a young bull on the end his rope and it was fightin' and charging to get loose. It went runnin' full speed toward this greenhorn standing by the fence, and the cowboy let the bull have some rope. That young dude thought he was dead! That is, until the old cowhand dallied and snapped that bull's head around about four feet from the kid. He left that tenderfoot with skid marks on his shorts! I can still see the old cowpoke's white teeth. With a big grin on his face he horsed that bull back and rode off. Now that's the kind of stuff that makes for a good "windie".

To a range cowboy, there is only one main rule of poetry. It gotta rhyme. "If it don't rhyme son... it ain't poetry, it's just plain 'ol story-tellin'". So, it may sound perty or hifalutin' but it's just story tellin'. Actually most cowboy poetry is simple two line rhyme and meter, reminiscent of the verses of old cowboy songs.

Modern cowboy poets have slipped in some poems that don't rhyme, but they are good to listen to—even though they are just story-tellin'. If you check their saddle bag, theys' probably' got a book or two on cowboy poetry, maybe even an e-book on their ipad!

You'll also find a "Glossary of Cowboy Lingo" in the back of Cow Chip Poetry. Every rural culture has its own working vocabulary and colorful colloquialisms. It is this unique lingo of the southwest cowboy that makes his poetry even more colorful. So, the lingo used in the poems of this book may at times call for looking up a word or expression in the glossary. May rifflin' through the poems and glossary prove to be a part of your overall enjoyment of "CowChip Poetry---Lies, Lingo & Lore".

In addition there is a section displaying the unique cattle brands of the San Diego County, USA.
They are registered cattle brands that date from about 1850 to 1950. These brands are included in this book as a scarce historical record, a curiosity to some, and as a fascinating slice of southwest regional history to others.

The source of the brand images are from a little marketing booklet (4.5 x 5.5) printed about 1948 by the Percy H. Goodwin Co., (Live Stock Insurance Agency) titled: "Brand Book of San Diego County." The booklet forward says:

"Cattle raising in our great Southwest has played a large and important part in the development and growth of the United States. It gave us an era replete with adventure, lawlessness, rustling and quick justice. It gave us men who were sturdy, self-reliant and solid; whose children carry on the traditional [cattle] business, still hazardous and exciting."

Cattle ranching, as a profitable enterprise in San Diego County, diminished and gradually petered out during the 1930's and 40's. However, a few small spreads and shirt-tail outfits continue down to this day, especially where year-around surface water is available.

While growing up, this author worked for the Y5 (Fred Mellor Ranch). (See poems: "Fever Tick" and "A Different Knot"). Eventually he combined cattle ranching operations with Fred and Elam Clark (The Clark Ranch). Besides their ranch properties, together, they had lease holdings of more than 3000 acres of what was then known as, patented land. I also worked for the Quarter Circle D (G. R. Daley Ranch). During the cattle ranching era, these two cattle brands, among others, were well-known to cowhands and ranchers of eastern San Diego County.

So, this book, "Cow Chip Poetry—Lies, Lingo & Lore," is packed tighter than a spring saddle bag. Hope' you enjoy the read.

May all yer' cow chips have a greener linin'.