A Feathered UFO—The Joy and Frustration!

Posted by Ed Keenan on Saturday, 31 August 2013 in Birding Articles 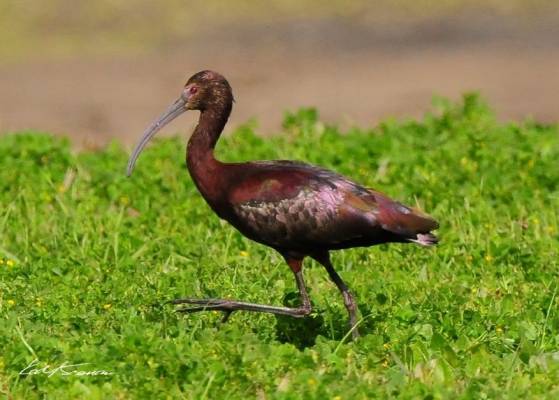 It seems no matter how often I observe the locally common birds, as common as they are they are still just as enjoyable today as they were seventy years ago. That was before I could identify any one of them by their proper name. Yes, before the acronym UFO, we were observing many unidentified feathered objects.

As I have written, I remember as a kid, living in the backcountry of eastern San Diego County we did not have a "bird book." At eight and nine years old, my brother and I personally named all the indigenous birds that we saw, creating our own childhood monikers. It was the only way we could recognize which bird the other was talking about. It's amusing now when I think of some of the names we gave them. Cheet-birds (Yellow Rumped Warblers), the "cheet" was for their common sound. Nazi's (Wren Tits), always skulking and hidden in the under brush. Okie-birds (Bush Tits), alighting in clans on a bush and picking off every single insect, like migrant Oakie-fruit-pickers pick fruit. Laughing-bird (Rock Wren), for its descending, laughing-like trill. Butcher-bird (Loggerhead Shrike), a name that we were told, etc. It is not hard for one to tell that these bird names date us back to the nineteen forties.

Well, I thought I had grown past that childhood experience, since I now have a number of good "bird books," including the latest and best-illustrated field guides. But, here I am about to do the same thing again. Yes, folks. What we're about to talk about here, is a "Feathered UFO!"

You see, on this particular day in late summer, I had taken what I call, a "birding lunch break." What that is, is a lunch break at a specific local birding spot. That's because I was in a service business that allowed me to be out and about. Over a period of time I have staked out a dozen or so such birding lunch spots within my lunch break perimeter—a distance of about five or six miles from my work. It's sort of like returning to your favorite fishing holes. Normally, I don't expect to see any more than the usual seasonal birds, except there is always an outside chance I may spot an uncommon beauty. Usually, only the more avid and experienced birders seem to enjoy such an encounter. At some birding spots I can sit inside my vehicle and observe. At others, I take my folding stool-chair-bag and walk into the area a little ways. Locally, the variety of habitat includes chaparral and sagebrush, willows and live oaks in riparian canyons, marshes, and seashore. Each of the out-of-the-way places is a pleasant respite from the daily grind, and each one has produced some memorable lunch-break-birding experiences.

It happened once before while on such a "birding lunch break." I experienced the joy and frustration of seeing a highly unusual bird and I had not a clue as to what it was, except that it was a colorfully feathered UFO! Occasionally, I do see birds that I don't struggle to positively identify, but at least I know they are one of the confusing nondescript variety, like those drab olive-colored vireos and warblers, second and third year gulls or various sparrows like those LBJ's—little brown jobbers.

But on this late summer day, I had the experience if observing a very unusual feathered UFO. I had stopped at the San Luis Rey River, near the Bonsall Bridge, in northern San Diego County, USA. The spot is about eight miles inland from the coast. The San Luis Rey River is a major tributary that carries the watershed west from the eastern mountains. The headwaters are on Palomar Mountain, the site of the famous observatory by the same name. From there, the river wends its way west approximately thirty miles to the Pacific Ocean. During winter this normally placid water course can become a mighty dangerous torrent.

As with most semi-arid areas of the southwest USA, any natural water habitat is likely to be an active birding location, especially in dry weather. Most creeks and rivers in this part of the west turn upside-down in summer, but this shallow river always has a stream meandering and flowing through the cattails, arrow weed, willows, cottonwoods and various tall weeds and grasses.

I had driven my Jeep Chickadee (Cherokee) over the river embankment and down the sandy slope on to a nice little rise overlooking an open area of riverbed. It gave me a good view upstream toward the willows and cottonwoods. Birds tend to travel up and down the river course, so I had a good observation point for any passers-by. The shallow stream makes a sharp turn here and then spreads out among some reeds and grasses, making it an ideal spot for waders. The sun was mostly at my back, so it was a perfect observation post to do a little lunch-break-birding.

Near this same area during mid-April and May, I had observed two birds less than common around here, a yellow-breasted chat and a blue grosbeak. It's now early August, so I thought I might get another look at these beauties before they begin moving back down to Baja Mexico.

Sure enough, the Blue Grosbeak showed up and landed on some tall fennel, blue sage and wild mustard near the river's edge. They seem to favor these plants as a seed source. I put my binoculars on this handsome male and I was struck by one of its most identifiable features, not just its striking color and rusty brown scrap in the wing, but its reflective slate-gray bill. Even in the shade, when his dark blue and chestnut-colored wing patch all appear black, his semi-glossy gray bill gives him away. Being typically nervous and impatient, he gave a few slicing flicks of his tail and a sharp "chink, chink," and he moved west, on downstream. I was pleased to catch this end-of-season look, and said, "Soon you'll be turning left onto the coastal route south, back to Baja. Adios—see you next year." 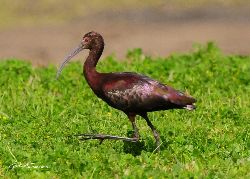 I continued to spend about thirty minutes observing a pair of white-faced ibis feeding in the shallows. Alongside them, two killdeers darted in short bursts like they were on greased roller-blades instead of straw legs. A black phoebe that kept swooping back and forth over the water, button-hooking a meal, seemed to annoy them. I admired the fact that I had caught all three of these birds at one time, in a single view of my binoculars. The whole scene—the blue grosbeak, the iridescent greenish-bronze plumage of the ibis, along with the killdeers and black phoebe—made a nice "birding lunch break."

I had put my glasses back into the pouch and stored them in the center storage compartment between the front seats. I was backing out to a turnaround spot when my eye caught site of an exotically colored bird about fifteen yards away. It was near where the blue grosbeak had perched. I stopped, shut off the engine and without taking my eyes off of this very unusual bird, fumbled for my binoculars. Excited at this first time sighting, I grabbed my brown lunch bag, the only paper handy, and began scribbling notes. All the time I'm talking to myself, "Hey, this is great! Whata'ya know, something new—like really unique!"

My first thought was, could this be a rare sighting of a red-faced warbler or painted redstart? But, when I focused my binocs on it, I couldn't believe my eyes! This was nothing like I had ever seen anywhere, not even in southeast Arizona or the San Diego Zoo. I knew immediately it did not exist in any of my field guides for the United States, western or eastern.

Picture this from my scribbled notes:

A sparrow-size bird or slightly larger, having a very upright stature. Perches upright and straight-backed like a European Stonechat. A dark gray to black head with some faint light gray flecking or streaking on the forehead and crown. A wide, brilliant red-orange or bright coral neck-band, like the collar of a turtle-neck sweater extending around from the throat to the nape.

From front and side views, the red-orange appeared to form a complete collar. Breast and belly, pale gray with a tannish wash, appeared to have faint streaks. Down the center of the breast, extending to the underbelly, a prominent dark thin streak (line) reminiscent of the great tit, common throughout Europe. I scribbled that the back and wings were dark gray to black like the color of the head. Under-tail coverts were the same striking, flaming red-orange or bright coral, as the neckband or collar.

My notes ended with, legs black, and a question mark.

I observed this feathered UFO through my binoculars for about a minute and a half as it perched and moved about on the tall weeds. It dropped down and disappeared in to the weeds bordering the narrow stream. It was followed by a pair of least goldfinches that seemed to be curiously attracted to this bird. Though I watched carefully for twenty minutes or so, during which time the goldfinches appeared again and left, I didn't see this bird again. Maybe it flew out when I blinked, or glanced at my notes. I mean really, isn't that the way it is with all UFO's!

This sighting gave me a real high—that exciting rush of exhilaration of seeing a bird in the field for the first time. Then boom! The frustration of what was it? Was I seeing things? Yes! But I had no idea of what I just saw. I checked my notes just to be sure that I didn't just make this up.

In fact, I said to myself "Forget calling the Rare Bird Alert," and "Don't even try to explain this UFO sighting to your birding friends." They'll trap you in a butterfly net and send you to the "funny farm" where they see these kinds of birds all the time! I asked myself, could it be a windblown "stray" when it's not stormy? Could this be an "exotic?" That's a possibility. But then I think of escapees as more likely to be near suburban habitat, not way out in the open wilds. Maybe it's an "accidental." If so, it's got to be from way south of the Mexican border.

If it was a rare visitor from below the Baja Mexico border then I need to get a "south-of-the-border bird book," and try to find its match. To date I haven't done that, so it still bugs the heck out of me not knowing what I saw. I'm sure someone can ID this beauty from the description. (If so, please send me a note). Till then, or until I get the right "bird book," I've reverted back to my childhood—to my personal identification system––you see folks, until a positive ID, what we have here is a "Flame-collared-feathered UFO!"